Here are a few pictures from the last month...

So Peter experienced one of the most memorable moments of his life (he claims it ranks third to getting married and having his first child, but I bet it is more like first or second). The Giants won the World Series and it is a month later and he is still talking about it! Our house is now covered in World Series paraphernalia, which is "for Everett's keepsake box" (Direct quote from Peter) but I suspect it is more for Peter. :) I have to admit, it was pretty darn exciting to watch. I never missed a game of the playoffs, knew all the players by name, and laughed and cried with Peter the whole way through. It is also going to be pretty neat to tell Everett that the year he was born, his Daddy finally got to see one of his teams win! Here are a few of the more memorable pictures from the final game. Can't you just see the joy and excitement in Max and Peter's faces, priceless!!

Posted by Meghan Getz at 5:05 PM No comments:

Let me tell you 'bout my best friend.... 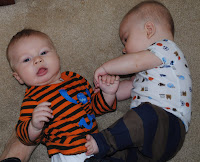 Posted by Meghan Getz at 6:07 PM No comments:

A few more from Halloween...

Halloween time! Everett had a great first Halloween. He was the cutest little robot ever. His nieces and nephews were adorable too! Holidays are so much more fun with a kid. :)

Ryan just sat there saying "Happy Halloween" over and over while we took pictures.

Ethan was so careful holding Everett. It was so cute. What a great older cousin!

Those are happy tears coming from Everett.

Posted by Meghan Getz at 5:29 PM No comments:

As you can probably imagine, our house was pretty excited when the Giants made it to the World Series. Giants fever has taken over our house and surprisingly enough Everett LOVES watching them on TV. I am not even joking, he is his father's son. He is mesmerized by the TV when baseball on. Here are a few pictures of father and son when they won

Gross. Here is the spit up I was talking about. :)

Posted by Meghan Getz at 6:56 PM No comments: